Why do my newly Debarked sassafras logs have mold appearing on the surface?

Attempting to use sassafras posts in ground. Just recently debarked a sassafras tree same day it was cut. Let it out to dry and now about 2 weeks later there is what looks like mold all over the surface. The interesting thing is that I also debarked another set of logs from a tree that had been already cut down about 8 months earlier and there is no mold at all. I noticed the tree that was debarked same day it was cut had a thin film between bark and actual wood that also came off. However that same film stayed adhered to the wood on the logs that had been sitting for 8 months. You also notice these logs have a hugely noticeable darker color likely from this film. Picture attached. Does anyone know when Sassafras should be debarked? Any insight on the mold? Why? Does this film actually serve a long term protection?
E3540FF9-46AC-4309-A805-60C13F137654.jpeg 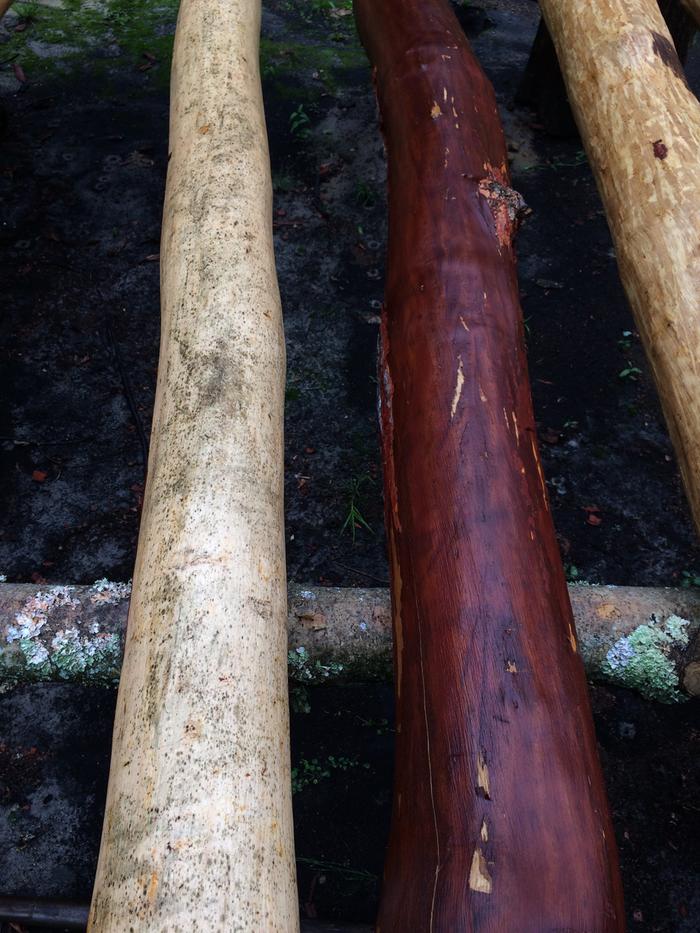 posted 1 year ago
What I think may be going on that could influence this mold growth is the tree just felled was actively growing, full of moisture, and the tree 8 months ago was felled while dormant, no sap flow and much less moisture in the tree, and had it's bark left on shielding the inner wood from exposure to mold spores while it further dried over the course of the 8 months. Hope this helps!

posted 1 year ago
Woah, that photo triggers some bad memories.

In 1975 or so when my family was building a cabin in the Yukon river valley, we cut a bunch of long spruce poles (probably white spruce, although perhaps some were black spruce) for the roof.  (Roof construction was log rafters, spruce poles as close together as they would fit for purlins, layer of Visqueen plastic, layer of dried moss, layer of plywood and tarpaper.  (This was so lossy, energy-wise, that more layers were added over the years: fiberglass insulation, more plywood, and asphalt tiles.)

We cut the poles in the spring when the sap was up, because that's when it's very easy to just pop the bark off.  But the poles then got stacked for later, because we were months away from putting up the roof.

And they molded.  Black and grey speckles, streaks, and in severe cases, continuous dark coverage.

Mom freaked.  She was looking forward to looking up at a ceiling of pretty white poles, not black ugly poles.

Labor was very tight -- there was a cabin being built on a crash schedule! -- so she designated the two lowest-value minions in her pecking order as official pole cleaners.  That was me (age seven) and my sister (age 10).  We got handed wire brushes and some harsh homemade liquid lye soap that had been rejected for any other use because of being too nasty, and were told to laboriously scrub all the dark colors off.  If it wouldn't come clean/white -- and it usually wouldn't -- we were supposed to go back for a second pass with draw knives and shave away any remaining discoloration.

When we weren't picking moss for the roof, that's what we did.  All damn summer.  It was very traumatic and awful.

As far as I know we never had a good explanation for why some fresh poles take mold like that when most do not.  But on a couple of other occasions over my years in that country, I was involved in building projects using poles that had molded in the same way.  The best and fastest way to clean them that I ever witnessed involved a heavy electric grinder with a wire brush attachment.  But "best" is not good, and "fastest" is not fast.

I do think the mold is related to harvesting the poles when the sap is high in the tree -- there's sugars or something for the mold to eat in the thin layer that coats the pole when the bark has peeled away easily.  But knowing that (or suspecting it) offers little help, because that's the only time when the bark is easy to peel off, so you can't just avoid cutting the poles at that time of year.  I am aware that some people would try peeling the poles and then painting them with various chemicals to forestall the color change, but I can't say if it ever worked for anyone.