What's Your Favorite Backhoe or Shovel For Certain Types of Work?

posted 1 year ago
While I was reading about digging graves in The Green Burial Guidebook by Elizabeth Fournier, she talked about what type of shovel and backhoe she orefers for digging graves.

For backhoes, she recommends:


Elizabeth Fournier wrote:As for a backhoe, I recommend a small rubber-tracked excavator, with a backfi ll blade on the front, because of their small size and agility. Once positioned, these small earthmovers can dig 360 degrees and usually handle a bigger bucket than a compact tractor-mounted backhoe.

For shovels, she recommends:


Elizabeth Fournier wrote:If you’re digging by hand, use a long-handled, steel shovel. The long handle is preferable to minimize back pain or strain from standing, bending, and shoveling for long periods of time

posted 1 year ago
I have a Wallenstein Log Trailer that can be switched to a backhoe. It can do some things most backhoes and excavators cannot do, but other things it does not do so well.

The biggest thing is, it is mounted upon a trailer, and has a dumpbody with it, so I can dig and haul. Most excavators and backhoes cannot do that. That means it is really good at digging ditches or swales because the ditch or swale can be shaped, and the excess soil hauled off to be put in another place. Or I can go down to my gravel pit and self load the trailer and then haul and dump the gravel where I need it.

It could easily dig a grave, and trenches for utility work, but would struggle digging a house foundation. That is because there is always a trailer behind it, so a person must dig off to the sides. Manuvering the tractor and trailer just right can be a pain sometimes. It probably could dig a full basement in a house, it would just take careful planning...a sort of digging tretrus that is for sure.

Another issue is that it is a backhoe and thus dig back toward itself. That is a problem with a trailer. I am working on making it into a front shovel so that it can dig faster, but also dig away from itself. That way when I am self-loading in my gravel pit, I can just keep working the face of the pit, and not have to dig down and towards itself; but that is a problem with excavator configuration, and not really the machines fault/

But it beats shovling, and its hydraulics are powerful! I have dug out frozen ground with it several times. 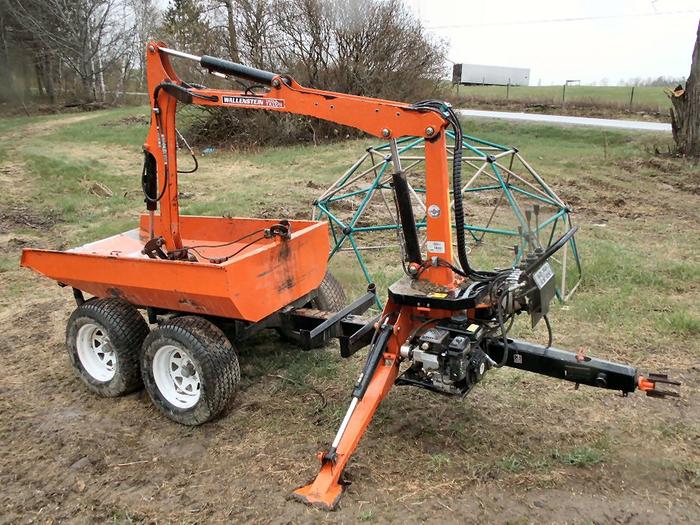 posted 1 year ago
The above post is what I have and love it, but after a little reflection, the was, "what was your favorite backhoe or shovel."

I eluded to it on my earlier post, but I have always had an out of control fetish for Front Shovels, also called "Rope Shovels", or incorrectly now, "Steam Shovels." My grandfather had one in 1969 and dug a lot of gravel out of our gravel pit. Today; how it worked, and where it worked, can be readily seen even 50 years later.

Front Shovels are neat because they dig in front of, and scoop up the material being dug, while backhoes must be on top of, and back from, what is being dug. This is not a problem if you are making a trench or digging a hole, but can be a problem if you are trying to move a pile of dirt. In my case, my little log trailer ends up pulling dirt towards itself when I am self-loading gravel in my gravel pit. I want to configure it so that it scoops dirt away from itself, which means every load I just creep up to the bank I an scooping out of. Another thing nice about front shovels is, they are about twice as fast as excavator configurations. That is because they do not have to dig down, then lift it back up to fill a dumpbody. With a front shovel, the bucket is already up when the bucket is full. It just has to swing over the dump body and dump its contents.

But there is another problem with my log loading trailer, it seems like whenever I have my backhoe on, I need to do some sawmilling, and would like to have my grapple on, and when the grapple is on, my word, I end up needing to dig. Because of the "bull clam bucket" that makes up a front shovel, I could get both. It could dig, but it also "pinch" so i could pinch a log and set it on my sawmill, or grab other stuff and lift it into my dump body. I can add a thumb to my backhoe configuration, but a bull clam bucket allows the bucket to be swung upwards, and teh back of teh blade used as a bulldozer blade. That makes grading areas easier and smoother than using the bottom of an excavator bucket. In short, if I had a front shovel on this rig, I doubt I would take it off very often to put on the grapple.

Another reason I really like the idea of adding a front shovel is that my little backhoe has incredible power. No matter what I am digging, even frozen ground, it gets a full bucket everytime. Unfortunately it is a small bucket. Its nice when digging a trench through roots and hardpack, but when I am digging gravel, my bucket could be three times bigger. If I doubled the capacity while making a bull clam bucket, not only would it only take 15 buckets to fill my dump trailer, because a front shovel configuration is twice as fast as an excavator, it would mean I could fill my dump trailer in 1/3 the time.

I prefer to use the bucket to self-load, because it is really hard to use my tractors front end loader to dig the gravel out of the bank. It only takes 4 buckets, but its hard to fill those four bucketfuls sometimes. It also means I have to unhook, and rehook off the trailer for every load, or use my SUV to pull the trailer seperately. Sometimes my SUV cannot haul the gravel or fill where I need it to go due to mud or rough terrain.

So I am really looking into fabricating my backhoe into a front shovel. Incidentally, it seems this will be a first. If you do a search for Mini Front Shovels, all they show is models of their massive brothers. I mention this because I will show what a front shovel looks like, but keep in mind these typically are mining sized machines. Do not be put off by the size, I am just showing what they look like. I also chose this picture so people can see how the bull clam bucket opens up. Mine will be a tiny version, that is all. 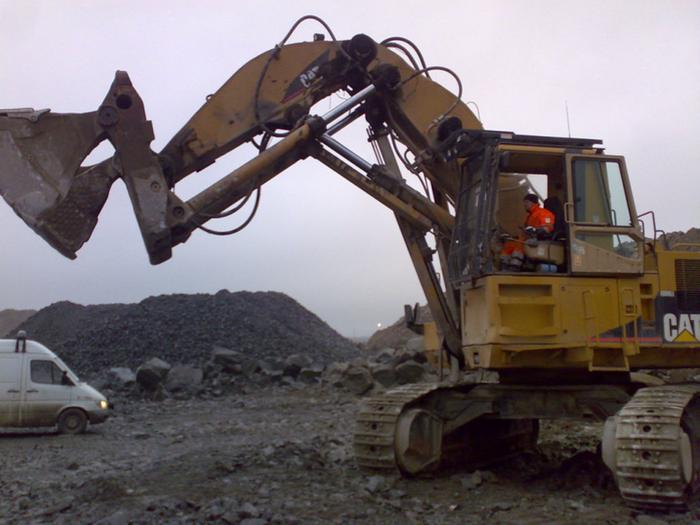