After reading comments elsewhere on the web, it seems some people have problems with the idea of a Sector Analysis. Hopefully the attached document will answer those queries.

Currently, I'm 'between' Permaculture gardens: the urban place is in the throws of renovation, the rural property is too remote for frequent travelling. So, with rural living being at the heart of it, I'm concentrating on it for a future retirement scenario.


Attached is the SECTOR ANALYSIS of the rural property. It's proposed to change it from a disused grazing area to the full Permaculture monty.

Originally it was my Grandparents farm that had the typical pre-WW1 home farm necessities: to sustain a large family with food inclusive of vegetables, fruit, flowers, herbs, fowl, pigs and the odd milking cow and horse. (Obviously, like Permaculture dictates, farmers back then lived in communities where trading commodities was common e.g. Mr X had lots of ducks and wanted a leg of pork, Mr Y had pigs but wanted ducks, etc.)

Over the years it evolved (or devolved), to a grazing paddock for cattle then, as my relative aged, into a small vegetable garden with chicken run and a lot of mowing to do.

At the moment it has neither a vegetable garden or a chook run = a blank canvass to work some Permaculture voodoo!


Note 1: the plans are actually more advanced than just the Sector Analysis, but they're not finalised yet.

Note 2: Southern Hemisphere, so things are the correct way up!

posted 1 year ago
Nice work F! Do you have your zone map too? Because they work together in choosing elements in the design which is one of those things that can get very interesting.

Rene Nijstad wrote:Nice work F! Do you have your zone map too? Because they work together in choosing elements in the design which is one of those things that can get very interesting.

Thanks for the feedback.

I haven't sorted out the Zones yet as it depends on the purchase of the neighbouring lot, which ideally would be mainly used to replant indigenous species as a wildlife area and to block views to a distant neighbour.

This lot is essentially a gully, water harvesting may be possible. Though I'm more interested in swale and keyline than making ponds.

So, will draft up two Zone plan options, just in case the purchase fails.

I'll post the Zone plans in the near future for critique.

posted 1 year ago
Okay, completed these plans a while ago, but due to several serious family dilemmas, didn’t have the time to post them.

Maybe these plans will assist newbies in putting ideas onto paper in a logical format.

Goes to show there's no real need for fancy Apps to draw stuff. I used MS WORD, inserted an aerial photo, used the MS WORD tools to add shapes, etc then saved it as a PDF. Accurate scale is not super important when there are features to work with e.g. comparative scale. 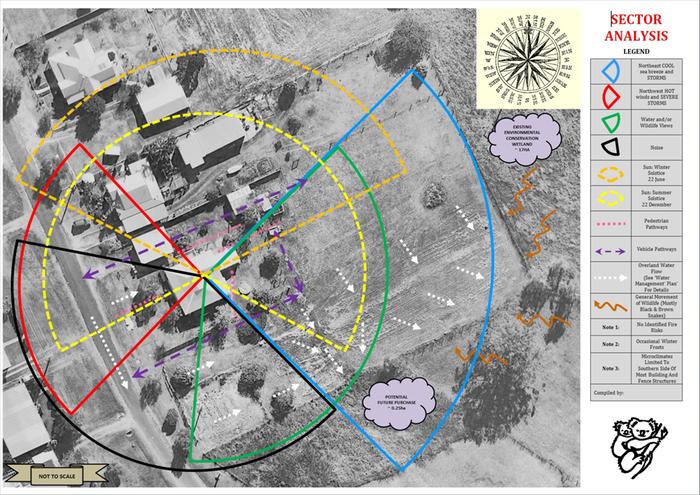 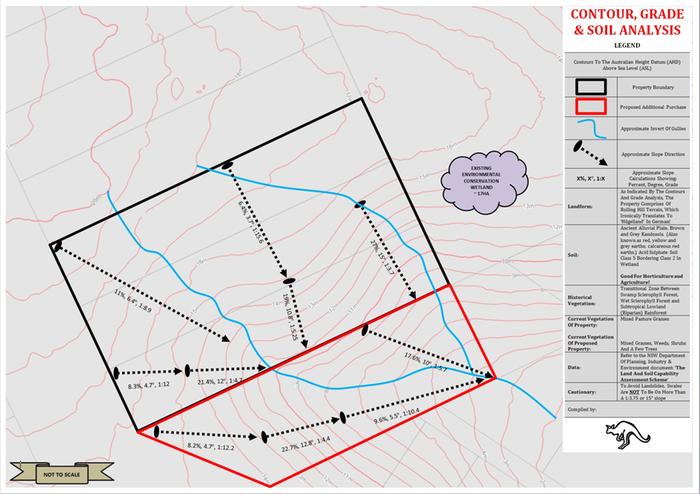 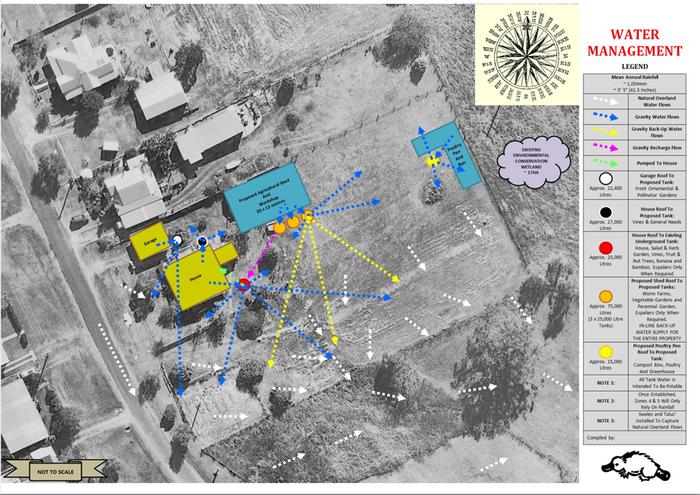 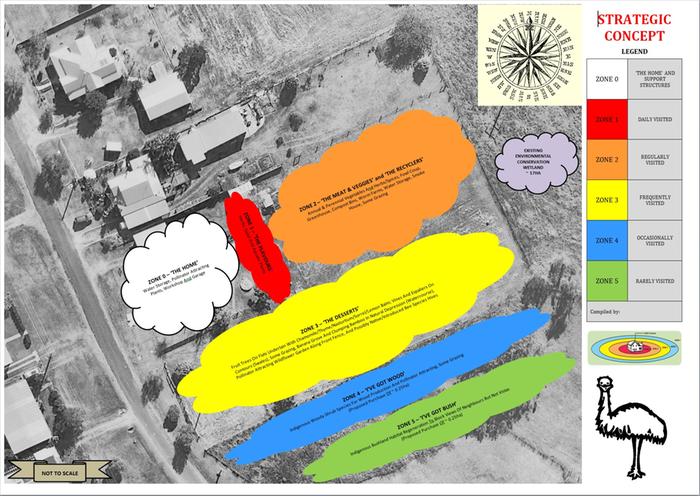 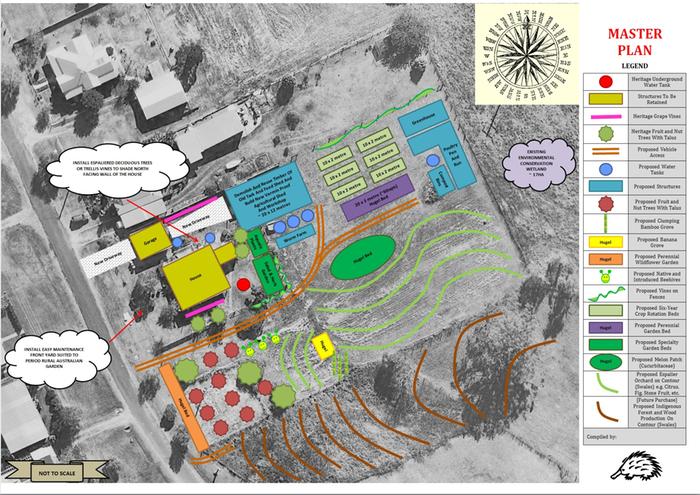 posted 1 year ago
Only thing I see is once you're retired, you might not have much fun walking up a hill with a load of fruit so you might think about some sort of paths for a tiny tractor or riding mower etc. Would only be a big deal if you grow something where you have to bring a few bushels up all at once. My property has similar grade to it and after being here several years and hitting my mid 50s, I'm sick of walking uphill, even empty handed.

I wish they'd update the topo maps here in the States. They haven't changed in many decades even though technology has.

I went to contourmapgenerator.com by verge permaculture and their's came out better and allowed me to change the line spacing. Still no perfect but when it comes time to start doing earthworks, I'll be using either a builder's level or preferably a transit. I've got one property line I need to extend and the surveyor wants $1200.00 to do it so I'm going to do it myself. All I want is an approximate line. No building or fence will go there. A builder's level just goes horizontal while a transit will swing up and down which is what I'll need to extend that line. I've got 350 foot of surveyed line to extend about 1000 foot and there's a marker at the other end of it so I should be able to get pretty close.

Thanks, yep, you certainly hit the nail on the head with steep slopes and ageing bodies!

Although the plan is too small scale to show it, I envisage constructing a network of gently graded paths joining the trees/vines that are on contour. The path material is undecided - cover crop, wood chips, or gravel.

Zone 6 (and Zone 5 to a degree) are the exceptions - left to 'go native' mostly.

My background is Surveying, so all the work will be done using level or theodolite - not happy with the accuracy of remote sensing contour calculations, particularly when there's a need to do it properly on-ground.

It seems your Surveyor quoted to do boundary definition work, which is indeed costly.

Extending the line can be as simple as using a string line, tape, and a can of spray paint.

In most rural situations, close enough is good enough. It only becomes an issue if you intend to sell - buyers responsibility anyway.

Good luck with it.

posted 1 year ago
Gravel would do best at holding soil in place and if not laid thick, grass or other ground cover will grow right through it. Everything I do as far as design and layout, I think about, will I be able to do this in 20-30 years? I'm going with an earth bermed house with South facing elevation(correct for here:) with lots of glass and design aspects of the earthship as far as a planter and trombe wall etc. I'll be using concrete rather than tires though. I've seen water bubble up out of the ground here after repeated heavy rains so no dirt floors or walls for me. Hopefully with the design, we won't have to use much firewood. We bought this place thinking about retirement also. My trombe wall will be rock since we have plenty here locally. It's mostly light in color so I'll put some dark concrete stain on it or try to find a more natural substance to darken them.

What really sucks is that this new survey whacked 40 foot off the North line compared to existing markers from a survey in the 80s. That line on my original 8 acres is 1175 feet long. 40x1175=47,000 sq ft. 43,560 sq ft is 1 acre so my 8+- acres became 7+- acres. This guy does the survey work for the county so there will be no going against his survey. Along with the adjoining 7.5 acres, that 40 foot loss adds up to 1.4 acres. I've heard from multiple sources that an old fence line takes precedence over any survey and there is an old fence which would take it down to a 20 foot loss but I'm not a life long resident here so I probably wouldn't get away with that. The only good path for a road to the build-able spot on the 7.5 is down that back line and that 40 foot loss will make it a lot harder to build a road but it's still doable. I also had to take down a lot more trees for my fence line than I would have before. Oh well. I've got two years worth of firewood split and stacked now so that's a plus.

I've been amazed at how fast top soil washes away so I'm going to be doing a lot of contour work myself. I've got an endless supply of rocks of all sizes here so I'm going to build a walls, just stacked piles, where the property starts to drop off to try and catch as much as I can.

I'm putting the fence three foot in from the property line for a couple of reasons. One is so that I can walk around the outside for fence repairs and what not. The other is that I didn't want to cut trees that were right on the line. Who really owns them? Some were mostly on the other side in a way that the surveyor was able to blaze them on my side. I will say he did a good job of marking things. He didn't just put corner markers in. He blazed a lot of trees and stuck some wood stakes in between that. I went behind and pounded angle iron and small fence posts in to hold the wood stakes as I know they'll rot out in a year's time or less. Since I'm doing the fence line three foot in, that will allow me to extend that line pretty easily as I can just cut down any tree in the line of sight.

I'm eyeballing this transit that's for sale locally for $100 and comes with the wooden tripod.

A David White 8300 is what I really want because - how damn cool looking can you get? 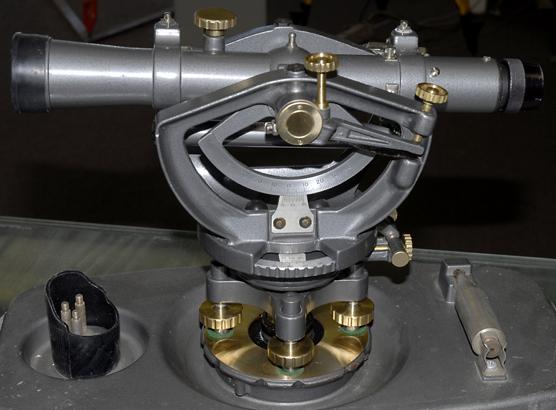 I don't want some new self leveling thing because electronics aren't going to last like metal and alloys.