Gwen Lynn
Posts: 736
posted 12 years ago
Not so cute of a story:
We had a lot of Brown Recluse spiders in our garage this past year. Perhaps more than ever. Really must do something about all the clutter out there. Went thru a spell of killing one (in the garage) practically every day. Hadn't really seen them in the house...until last nite! Well, since it got cold, I hadn't seen them in the garage either...but they're still out there...hiding.

I have a lot of trouble falling asleep, so I thought I'd try listening to some soothing classical music after I get in bed. So yesterday afternoon, I brought in a portable am/fm/cd player that had been in the garage since summer. Set it up on my nightstand. Also planned to change the bedding yesterday, but didn't get around to it until bedtime.

Kinda glad I procrastinated because when I picked my pillows up (which were very close to the stereo) to put clean cases on them, there was a spider scrambling for cover! It was moving really fast, so at first I didn't think it was a recluse, but I put the pillows right back down on it. Needed hubby to help (not because I'm chicken, but catching this bugger would take 2 people. Someone had to be ready when the pillows were moved again!)

Hubby trapped it with a plastic cup & slipped paper under the cup. Of course, he wanted to make sure it wasn't a good spider before killing it & usually I feel the same way, but it was late, I said just flush it! We were both glad we did because once it hit the toilet bowl we could tell for sure it was not a good spider! I'm sure glad we found it before I crawled into bed!

Lesson learned: When you bring stuff in from the garage...check it 1st! I know, it could have got in the house some other way, but the whole set-up is pretty convincing that it was hiding in that cd player! Crawled out & headed for the 1st warm, dark place it could find...my heated waterbed! YIKES!
Leah Sattler
Posts: 2603
51
posted 12 years ago
yikes! those fiddlebacks are not something to fool around with either. my garage is full of them. we found one in the house not so long ago, it was the biggest one I have ever seen. probably a full two inches in diameter. most of the ones I see are pretty small this must have been some kind of freak. We also have our share of black widows. they seem to be under every rock I move. I'm glad you moved the pillow and found that guy before you rolled over on him at night!

The best way imo to keep bad spiders at bay is to keep good spiders in abundance. too many people freak out and kill any spider. same with snakes. for every good one you kill you make room for a bad one to move in.

sneaky little buggers. the title of your thread totally peaked my curiosity. in fact I was a little wary  of what I was opening up with the name "trojan" involved.

Gwen Lynn
Posts: 736
posted 12 years ago
That's a big one all right! The majority of fiddlebacks we've seen around here have all been about the same size. Makes me think we had a hatch out at some point & just haven't killed them all. They need to start killing each other!

Last year, I saw a 2" fiddleback out at the barn I work at. My boss was going thru some boxes of stuff. He sets this big box outside the door as I'm walking by & says "there's a big fiddleback in that box, be careful!" Then he goes back inside to what he was doing. And I'm thinkin' isn't he going to kill that spider!? So I gingerly begin picking the stuff out of the box, one thing at a time, until I find the spider, and she was HUGE! Definitely the biggest fiddleback I'd ever seen and she was plump. Her abdomen was as round as a gumball, no doubt she was full of eggs. Fiddlebacks don't usually have a really round butt like the black widows always seem to have. Well, I squooshed her flat.

You are right about the usual non-selective destruction of spiders that most people do. Usually we are spider preservationists around here, always I.D. first, then kill if necessary. I have to take a "shoot first & ask questions later" attitude when they are scrambling around in my bed, though!

Leah Sattler
Posts: 2603
51
posted 12 years ago
I think I would take the same approach to one in bed! guilty until proven innocent. I like spiders but not enough to share bedtime stories with.

posted 12 years ago
I prefer to keep lots of wolf spiders (very tidy - no webs) and daddy longlegs (easy for visitors to identify and not be afraid of).

Gwen Lynn
Posts: 736
posted 12 years ago
I'm with you, Paul! I love wolf spiders, jumping spiders, garden spiders, orb weavers, house spiders & grass spiders too. We don't use pesticides at all. Those dang fiddlebacks are just too good at hiding. The other spiders don't find them I guess. Here's a beauty of a wolf spider, a walkin' on the water!


Spider trivia: Did you know that a Daddy-Long-Legs isn't actually a true spider?
check out: 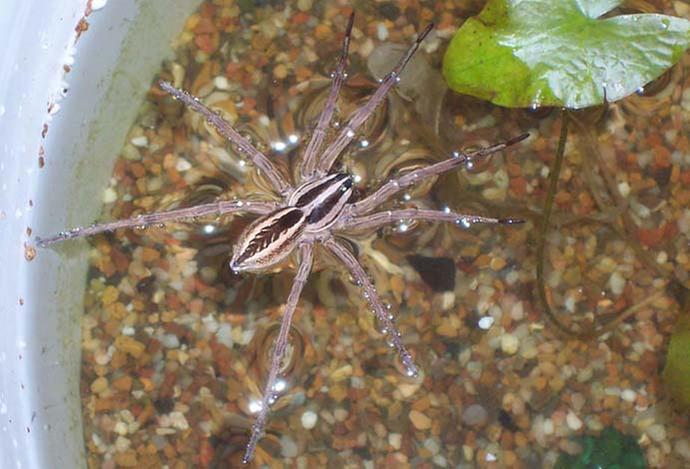 Leah Sattler
Posts: 2603
51
posted 12 years ago
That is a cool picture! I find lots of wolf spiders when i am toodling around in the garden. we tend to have jumping spiders in the house more often than others. last nite we were sitting in the living room and I pointed out one that was lowering itself from the ceiling to the kitchen table. I like to watch them hunt flies on the window screens. we had a big beautiful garden spider out front one year. I used to hunt down bugs to throw in her web to watch her race down and wrap it up. I made it a point to leave her egg sacs although Ihave never seen one as big and beautiful as her. again i wonder if it was all males that hatched out? are the males smaller and less colorful?

Gwen Lynn
Posts: 736
posted 12 years ago
Yep, as with many (but not all) species of spiders, the male Argiope (aka Garden or Zipper Spider) is smaller & much less obvious than his female counterpart. Male tarantulas are smaller too. They only live a few years. Our female tarantula lived into her 20's!

Unfortunately, Argiopes are preyed upon by wasps, such as the Tarantula Hawk & Spider Wasp. (I suspect other types of wasps prey on spiders too.) I think birds probably prey on them too.

According to the Nat'l Audubon Field Guide, male Argiopes are smaller & they build their webs in an outlying part of the females web. The female dies after she's filled her egg sac. The eggs hatch in autumn, but over-winter in the sac.

However, I have found empty egg sacs near where an Argiope had a web. Unfortunately, the Argiope had been killed by one of those wasps. I saw the whole thing unfold here in my backyard. We tried to save the spider. (chased the wasp off & put the spider in a safe place where she might crawl away if she got over the wasp venom, but she didn't. Kinda sad.

)
Nothing ever hatched out of her egg sac. I think she built it and never got the chance to fill it.

We had a bunch of Argiopes in greenhouses where I used to work. They were the biggest ones I'd ever seen. So big, we could feed them grasshoppers & they'd eat them. There was at least 2 spiders in each greenhouse, 1 at each end. They had a pretty cushy life in a climate controlled environment. Between that & us feeding them, they got to be giants.

Here is a pic of an Argiope at the barn. She just vanished from the web one day; had been there for weeks. Built her web between a potted hibiscus & the non-sliding glass part of a sliding glass door. Managed to keep everyone, the dogs, kids, etc. from disturbing her, but then...she was gone. It was a bummer too, because she had a male hanging with her, but hadn't gotten around to making an egg sac yet. Sometimes, it's a hard world for the little things.
Argiope.jpg 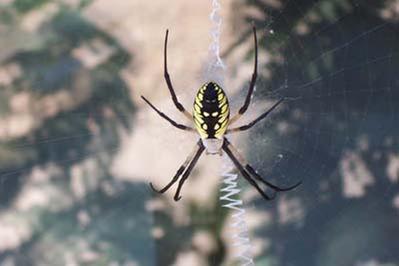 Susan Monroe
Posts: 1093
Location: Western WA
7
posted 12 years ago
WenVan, what part of the country are you in?

Sue
Gwen Lynn
Posts: 736
posted 12 years ago
I'm in Northeast Okla. Just added that to my profile. Been meaning to do that!