posted 3 years ago
I saw this and thought it a great idea. was wondering if any here have done this, how did it work out.
seems like an easy way to get them to make you some extra honey on the side, rather than stealing there food...lol
once I got my land I think Ill try it.
jar-beehive1.jpg 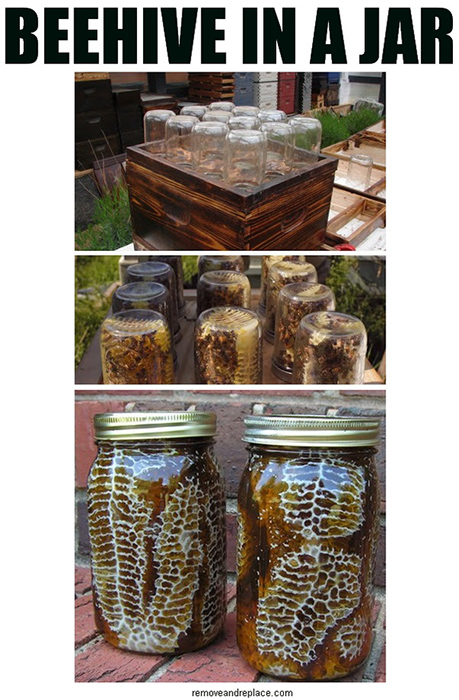 posted 3 years ago
It does look like a cool idea, so I googled it and found this blog: https://lovelygreens.com/honeycomb-built-into-jars-bees/
One of the reasons I haven't tried to introduce domestic bees on my property is that the reading I've done suggests that what they call "the super" full of honey would be too heavy for me to manage comfortably. This system would allow me to remove a jar at a time.

I've also read that people who really put the bees needs ahead of the human needs feel that giving the bees forms that force them to build the comb to a human's desire has increased the disease risk. This system is allowing them to build into that jars however they want. It would be interesting to hear from one of our permie bee experts, as to their feelings on this system.

I've never tried it & don't think it is common. I believe it would work but is not in the best interest of the bees. Fat Bee Guy on You Tube has some good video of the technique.

One full "frame" from a "super" weighs roughly the same as a full jar.

Maddy Harland
author
Posts: 25
18
posted 3 years ago
Permaculture is all about mimicking nature - working with it rather than against it. This system is like factory farming. It forces bees to make comb and lay down stores in a small space. Bees like to have room to create comb in natural forms and have a very specific distance between their combs that allows them to create exactly the right temperature and humidity for the hive. Glass jars would be impossible to moderate temperature - like a greenhouse without doors or windows. They are also light and bees need darkness. Their hives are worked by smell not sight. This system would stress them all both counts. Stressed bees are like humans. Their auto-immune systems are weakened and they succumb more easily to disease. Keep bees as naturally as possible. They are sentient creatures, not machines that produce product. Natural beekeeping is a fascinating subject and worthy of study for all permaculturists'.
tel jetson
steward

it would be easy to put a hive body and lid over those jars, so the darkness issue seems like an easy one to solve.

posted 3 years ago
That is true. Not tempted to try it. Would be interesting to hear from someone who has.

We tried it one year. (The jars covered with a hive body and lid, so that it was as dark as normal.) The bees didn't build comb in the jar. We speculated, that if we were to try it again, we might pour some wax into the jar to give them someplace to start, or attach a small piece of comb.

As my daddy is fond of saying, "You can't make a bee do a damned thing".

posted 3 years ago
The pictures of exposed jars are after an outer cover has been removed. Usually a deep hive body and a lid.

Bees would not usually want to draw in a small jar like that, but you can encourage them to do it by reducing their nest size and making them a bit overcrowded, while a good nectar flow is on.

Also, bees seem to only reliably draw fresh comb for me in spring and early summer. You probably would have limited luck doing this after about July.

Jay Angler wrote:
One of the reasons I haven't tried to introduce domestic bees on my property is that the reading I've done suggests that what they call "the super" full of honey would be too heavy for me to manage comfortably.

posted 3 years ago
Re hive weight - it is a serious consideration for many beekeepers. There are various options:

Horizontal hives - the honey is harvested frame by frame, not by the box. The most you need to lift is a single frame or bar at a time.

Conventional hives - but only using medium depth equipment. This reduces the weight considerably per box, but they can still be pretty heavy when full.

8 frame hives - same as above, using medium frames. The narrower hives are in fairly common use and quite popular. The combination of medium frames and 8 frames vrs 10 frames makes a big difference.

The other option is to get a hefty helper for when you need to inspect :)

Posts: 5763
Location: Cache Valley, zone 4b, Irrigated, 9" rain in badlands.
2359
posted 3 years ago
Regarding hive weight: One time when installing honey supers and queen excluders, the queen was on the lid when I opened the hive, so she ended up in the top box, and laid brood in the honey super. Therefore the 9 frame deep got filled with honey. At harvest time, It was beyond my ability/desire to lift such a heavy box, so I ended up harvesting the combs frame by frame.

posted 1 year ago
The instructions I read said to put some comb in the jars to start them (and the design has a roof over everything so they're in the dark except when you harvest.). The company went out of business, but they were in business for a while so there should be some good experience to draw on from people using it.  They said put the jars out with comb a week ahead of when "the main honey flow" (https://makinghoney.info/summerhawk-ranch-mason-jar-beehive-review/), not sure how to know when that is.  one advantage is being able to see what's going on inside the hive without disrupting things by pulling the hive open.

I hope there are other companies making this, but it's hard to find and the reviewer said there was only one company at the time the wrote.  It doesn't seem too hard to build if you have tools to make a hole into the jar (even if the hole doesn't fit the lid exactly but is smaller, the lid can be attached with other means).

Regarding the factory farming aspect of this, I can't speak to it yet, but the human-made box form doesn't seem more natural than the round jar as far as that goes.  Round is nature's way, from the shape of a bone to a leaf to a foxhole.  I've request Song of Increase from the library so I will get more up to speed soon.

Mark Dominesey
Posts: 21
Location: East flank of the South Mountain, Maryland Blue Ridge
3
posted 1 year ago
Two + years ago when Sierra bought out Summerhawk Ranch's last bits, I went overboard and bought 8 of their "Mason Jar Supers".  I tried it the year before this past and nothing, I didn't put any on this past year as coming down from the tumor in my wife's head still has dampened a lot of activity on the homestead.  Still struggling with Flow too, though we did do ok this past year.  I still struggle, five years into this, to keep bees alive over the winter, and bought a thermal varroa treatment system probably too late this past year, we'll see who and what makes it through.  I am seeking a way to do this adventure with out Apivar or Oxalic Acid so I hope the Victor works this next year when I get on it early enough.

Anyways, back to the mason jar supers - it seems they do better with some "seed" beeswax or some "seed" comb.  I am going to try this this next year.