rose macaskie
Posts: 2134
13
posted 10 years ago
THe botija.
In spain there is a great bottle used to take water out to the feilds or building site and know that it will keep the water cool. It is is a biscuit baked that is to say unglazed nearly totally closed jar that keeps the water cool because pottery is permaeble so the water albe it only a bit of the water is always beign drawn through the pottery walls of the jar and evaporating off it, so keeping the water in the jar cool.
there is a spout to drink from you dont put it in your mouth but pour the water into your mouth taht commes out of the spout in a thin stream. and another aperture in the bottle that is wider used to fill the bottle this aperture is meant to be corked oncce the botija has been filled but i have never bought a cork for mine.
You are meant to fill it full of agua dente alchol to cure it before you use it. I hardly use mine and it taste so strongly of mud as for the taste to be suprising as it is a fired vessel.
that you pour the water into your mouth means aht you an share the same bottle witheveryone even if you are a hygene freak and mayb eas this bottle is used for years this is a neccessary helth safe guard.
the water in the bottles of people who use them in the feilds doe nto taste of mud they know how to manage this sort of bottle. I am not sure if they an be used for wine as well as water or not.
I have taken photos of the botija. agri rose macaskie. 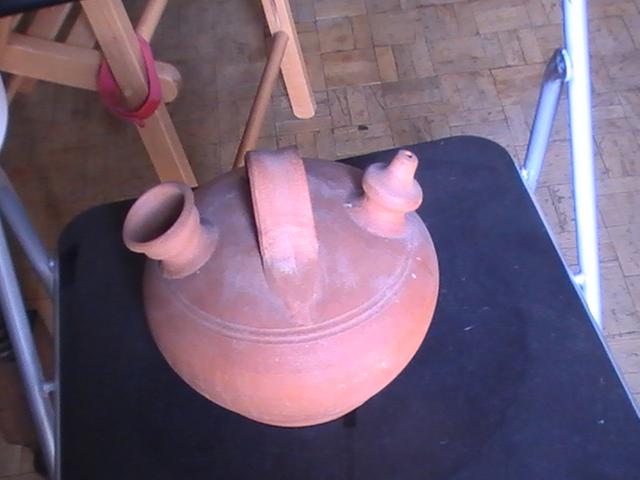 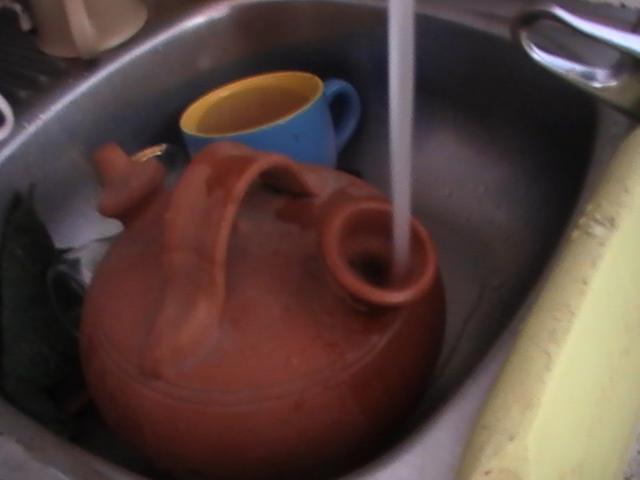 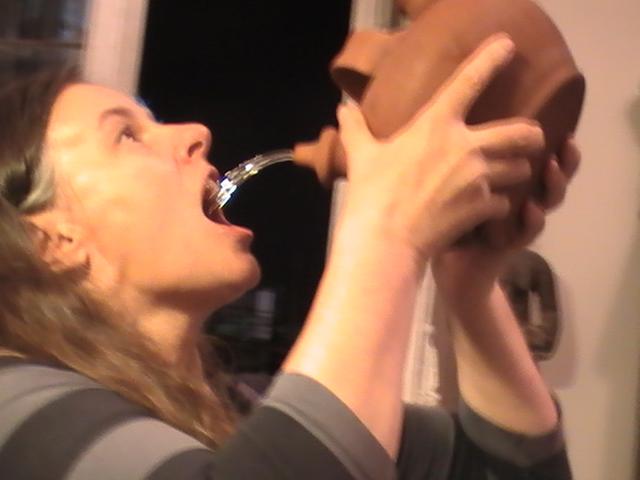 rose macaskie
Posts: 2134
13
posted 10 years ago
There is in a permaculture magasine another version of this idea but i am going to post the photos of my version. This is to use the same principles that keep the water in the botija cool to keep food cool.  I have tried to make a cool box with pots but I have only once used one of them, it did work but there were a lot of problems like keeping the whole clean. I have been thinking of a good design for a lid to better the plan.
I dont like fruit that is too cold because it has been kept in the fridge this design would keep the fruit cool enough to stop it going off too quickly but would not make it too cold also it might be helpful to people who did not have a fridge.
Designing a really good cool box could be a way of earning money for some person, we need all the ideas we can get for jobs in these bad times. Here are the photos of  my attempts to make such a box.
The first photos is of a flower pot with its hole blocked with concrete. I am not great about the different mixes of concrete for different jobs and how to set it really well so this may well leak.
I have put some bits of brick into the pot and under it. Into it so as to hold the second pot off the floor of the first pot, so water will fit between the two. I have also put some bits of brick under the pot so  that the damp pot does not mark the kitchen floo though i have photographed it all in the garden as ther is more light there like my door mat you might think its made of iron but it is made of rubber of old tires reused I guess, which is cool and much cheaper.
I think i filled the bottom of the second pot with concrete to weigh it down when i put water down the sides of the whole, water that will keep the box cool. I just put plastic plate on top, the sort made to put under pots but a special pottery top with a hollow middle that you could fill full of water would be better i imagine.
In Madrid i made one and decided to have a plastic container for the fruit inside the pottery one, so as to be able to wash it out, with gravel in the bottom to stop it floating.
Meanness made me chose a slightly smaller pot which is silly, to be really usefull these should hold plenty of food and vegetables. Pots are much cheaper than fridges.
If i buy the pot one size bigger than the bigger pot of the two in the photo then i wil begin to have a decent sized cool box. agri rose macaskie. 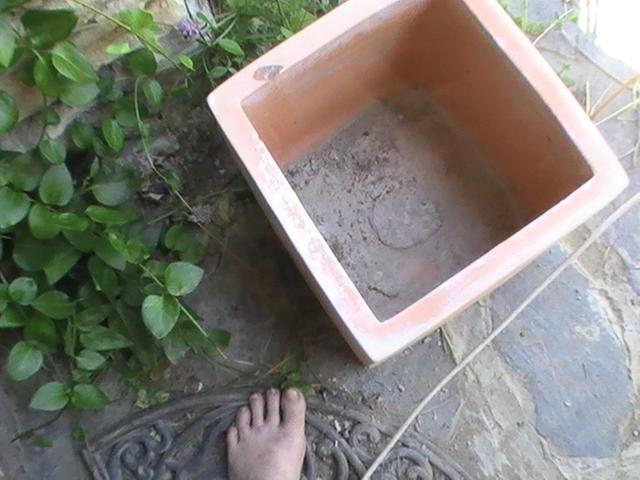 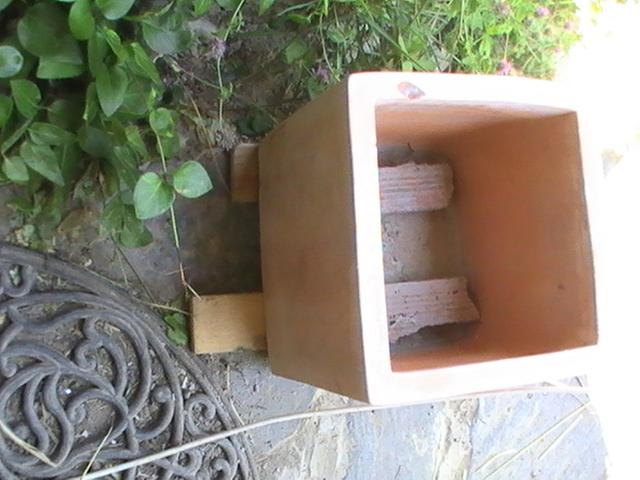 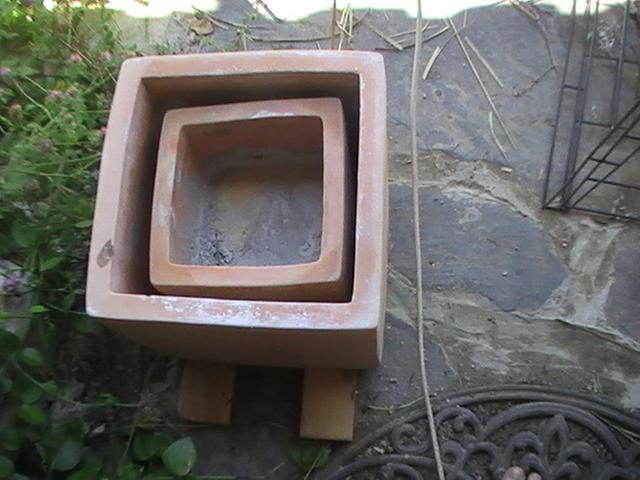 posted 10 years ago
I plan to make one of those small flower-pot refrigerators one of these days.

I can't remember the name of them.... Zeer pots?

H.Ludi tyler.I think that they would be best if they were made by potters. A potter could make a lid that held water too. A thick lid with a hollow inside it or a lid with a dip in the top or a wall round the edges in which you could pour water.
In this effort I have photographed  to make a cool box. I used as a place to keep the fruit withiun the outsid epot  another and smaller pot but in the one I made in madrid I used a plastic basket part filled with stones to hold it down as i meant to put water between the two parts of the design. The trouble is the gravel soon got messy. I suppose you need a platic basket that is easy to wash with a false bottom a big compartment at the bottom full of stones or sand or concrete. If you think how many peoploe ther are in the world who might want such and object it should be a way of making money for a lot of people.
Taling of businesses, my veiw of global warming is that there have been so many floods this year, in the Missisippi the an area the size of Italy flooded, now in thailand I think it is, an area the size of Spain has flooded, and Pakistan has had big floods again that are totally not your usual thing, as it did last year, and last year it was serious floods in china as well as pakistan, so that  havign  having solar panel factories that work at a loss must be a good thing it must be cheaper than paying for the flood damage and for the food that is lost through global warming not to mention less likely to leave people hungry and willing to revolt, maybe the revolts are a good thing though.  agri rose macaskie.