John Brenne
Posts: 32
posted 9 years ago
I currently have an aquarium heater in a 6 gallon bucket that gravity feeds water through 1/2 pex with heater cable wrapped around it. It will probably work fine to about 10 degrees, but not below that. I am thinking about placing the 6 gallon bucket or larger container on a piece of foam insulation on the ground and having a 250 gallon an hour pump the water up (4 feet) and gravity feed back into the heated water container. Does this sound like a good idea? Can I install a gate valve to control flow? Any feedback would be helpful.
IMAG0015.jpg 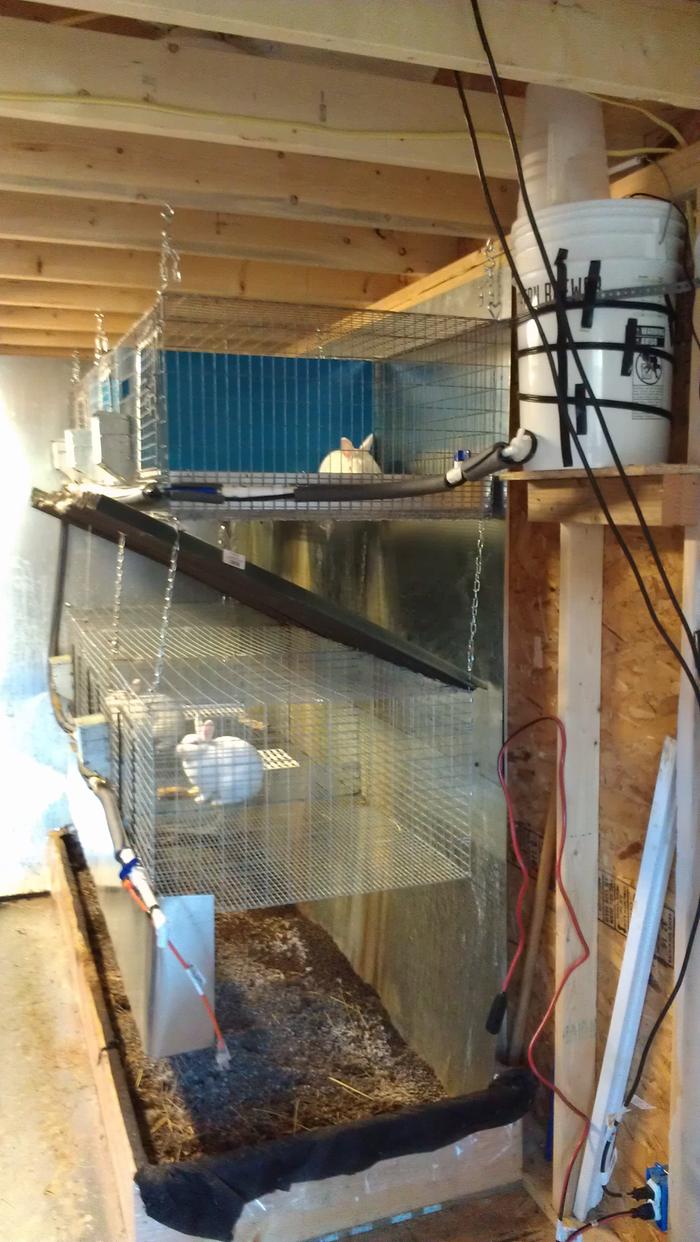 Sherwood Botsford
Posts: 139
7
posted 9 years ago
A tiny pump circulating water back to the heated pail should work.

How cold are you talking about?

You can also get heated dog waterer dishes that hold 1-2 gallons.  May be easier to do that, and just fill the dish a bit mroe often than you fill the pail.

Here in Canada, such dishes are available at any farm store -- UFA, Co-op, Peavey Mart, Princess Auto.  You can also get heated dog pads in various sizes.  They don't get very warm, but they will keep bedding dry, which is a big win.

John Brenne
Posts: 32
posted 9 years ago
The average low temperature in Jan is 4.3 degrees F, but it can get to -40 degrees F. I have got it set up so I have the kids and I feed the rabbits everyday at 6 and that takes at the most five minutes. I would like to keep the 6 gallon or above approve to reduce any unnecessary labor or time commitment.
Sherwood Botsford
Posts: 139
7
posted 9 years ago
If it gets to -40, you may need a larger pump.  The question will be:  Can the water cool to 32 in the time it takes to run from the pail to the waterer back to the pail.  So if the waterer is 1 gallon, and you use a small pump that circulates 2 gph, then the water is outside the pail for 30 minutes.  At -40, I suspect that 30 minutes is too long a time.  My dogs' water dish films over with ice at those temps, and the dogs poke a hole in the ice with their nose.

I think I would go for at least a 1 gpm pump (60 gph), and insulate the tubing both ways.

Probably want to put a thermometer on the pail too.  You can get spike dial thermometers, which you can poke into the pail, then seal with silicon seal.  This would allow you to see if the aquarium heater is keeping up.  You may end up having to put another heater in place.

At -40 aren't the rabbits spending a lot of energy keeping warm?  Would it make sense to partially heat their area to increase the feed to meat ratio?

John Brenne
Posts: 32
posted 9 years ago
4 degrees average coldest temp, can go down to -40 but rare.
Sherwood Botsford
Posts: 139
7
posted 9 years ago
Yeah, but you have to design the system for worst case.  And even at -4, a lot of Purina Rabbit Pellets (or your own hay) is used for heating bunnies, instead of building bigger bunnies.

The pictures are obvious inside.  Garage?  Does it get to -40 IN the garage?  Brr.

(I live near Edmonton, Alberta, Canada.  We too get a few -40 nights each winter.)

John Brenne
Posts: 32
posted 9 years ago
Never been through a winter, but at $13 for 50#'s of feed seems cheap to give them an extra scoop for 5 weeks till they reach 5#'s. There in their own 8*18 shed.
Brad Davies
gardener

Posts: 213
Location: Clarkston, MI
13
posted 9 years ago
I really like your setup! Looks very similar to what I got going, although much more polished. I really like the flashing, excellent idea! Is that a bottling bucket I spy feeding the water supply?

I think you’re on the right track with the recirculating method. I would make sure you insulate the bucket well, including a lid. Also make sure you are using a mag drive pump so you can control flow without putting undo stress on the pump motor. Another thing to consider would be to make sure the pump has enough head to reach the top and still have an adequate flow.

Now for my questions

I am about to create a second level to my rabbitry and am wondering what you used as the angled, umm.. turd shield I'll call it?

Also, what did you use to get the water from the PEX to the rabbits, some sort of emitter?

I am about to create a second level to my rabbitry and am wondering what you used as the angled, umm.. turd shield I'll call it?
Fiberglass roofing panel.


Also, what did you use to get the water from the PEX to the rabbits, some sort of emitter?
The bottling bucket gravity feeds the water.

Mag drive pump. I will research this. This is the info I really wanted because I want to be able to control the flow. Thank you for the info.
Dennis Mitchell
Posts: 186
Location: 7b desert southern Idaho
20
posted 9 years ago
I think the system you have will work better than you think. You might get a better result insulating the building. Maybe a small space heater that kicks on at zero.
Brad Davies
gardener

Firecraft wrote:
Mag drive pump. I will research this. This is the info I really wanted because I want to be able to control the flow. Thank you for the info.

Thanks for the info!

A mag drive pump is pretty much standard for all aqaurium applications. It uses a magnet to spin the impeller so there is not physical conection to the drive motor. This allows you to reduce the flow with a valve without putting extra stress on the pump motor. It also will keep any fluid from being contaiminated should the pump crap out.