I have 68 acres in northeast Georgia but for the past four years I’ve been living on Molokai in Hawaii hoping to find homestead land to farm. Seems the universe is posting me back to Georgia and it’s what seems most practical at this stage. I’ve been doing small permaculture projects all over the island but it’s time to step it up. I really admire and get so inspired when I listen to Mark Shepard and see the results he has gotten. I have the passion to get something real going in Georgia. The first step is complete with having land, plenty of it. I have so many ideas but I want to work efficiently and start properly. Quick notes about the land:

The area I want to start has an old house that I would like to eventually take down. There’s a couple buildings on the land and in tact, one I would like to replace the roof with greenhouse roofing for a nursery. My grandpa had a pond built decades ago and it’s totally naturalized and beautiful. Just grown up around the edges. It is set higher in the landscape to the north. There’s a spring on the lower part of the land with a small pond that is fed by that. Close to the small pond is a patch of wonderful blueberries. There’s a few fog trees on the land and catalpa trees. There’s an open area of about 1 acre and the rest is temperate deciduous forest. Oak overstory with hickory, maple, few locusts, sweet gum, sycamore, wild cherry, and Chinese privet as most of the woody perineals. Below the small pond is a small creek. From the large pond an overflow spout drains excess water to the stream.

Here’s a rough draft of a game plan:

Get nursery setup going and plant plant plant trees for going straight to the ground and for grafting. Working out the water management system which could include stopping the overflow and flattening a spot for a passive overflow into a swale and meandering the water down. To the east of the large pond, there’s an existing swale that I would like to contour the bottom of and block the end that takes the water under the road and off the property. The spillway of this swale would passively flow into the pond to help keep it topped off. I definitely want to move the system into woody perineal food system with a smaller veggie garden for annuals. Deer traffic the property and maybe the Chinese privet could be cut and woven into the adjacent trees to reinforce the deer paths. I love the alley cropping system but I’m not sure if it’s proper for this land as it’s already wooded. Maybe slowly introducing patches of fruit and nut trees with understory plants in areas that have privet and moreso undesireables. Bamboo is suck a great resource and I would love to plant construction type bamboo around the large pond for future building materials. There’s a shallow spot in the large pond that I’m interested in trying to grow rice, maybe? Where the existing “house” is that would be taken down is the spot I see building a new house. It’s flat and still below the large pond (gravity fed water). Also another idea is to fit a pipe through the dam of the large pond which is on the south side and have sort of a swivel pipe that would spill into a swale when irrigation was needed. That way depending on how the water system goes, I could irrigate from the large pond all the way down to the blueberries effectively irrigating the whole area. I have many more ideas but I wanted to hear from the permies community. It would mostly be myself doing this possibly with help from friends. I’m 26, I know what hard work is and I’m committed. I just want help in prioritizing, in the past projects have become overwhelming because of so many ideas. As far a quick food my parents love just up the road and I would be growing veggies in the back garden possibly along with maybe Fukuoka method in the open area above the blueberry patch. I’ll load a map:

Top of map is the large pond, yellow lines are possible swales, thick yellow line is the existing swale to be blocked and drain to large pond, green dots are fruit trees/blueberry patch, thick blue lines - one is the drain stream from lake, other is the perineal stream, red X is the house that I want to take down (building site).

Future plans include it being a teaching site, a place for anyone who wants to learn to come and volunteer. I hope to eventually build small places around the property for people to stay. And my partner hopes to build a wood fire kiln for ceramics. The overall goal is for regeneration and to set an example of how this can be accomplished in the temperate deciduous biome.

ANY advice is much appreciated. I so believe Mark Shepard when he says woody perineal food systems that mimic the biome are the way to regeneration and abundance, I feel obligated and privileged to be a part of the action side. 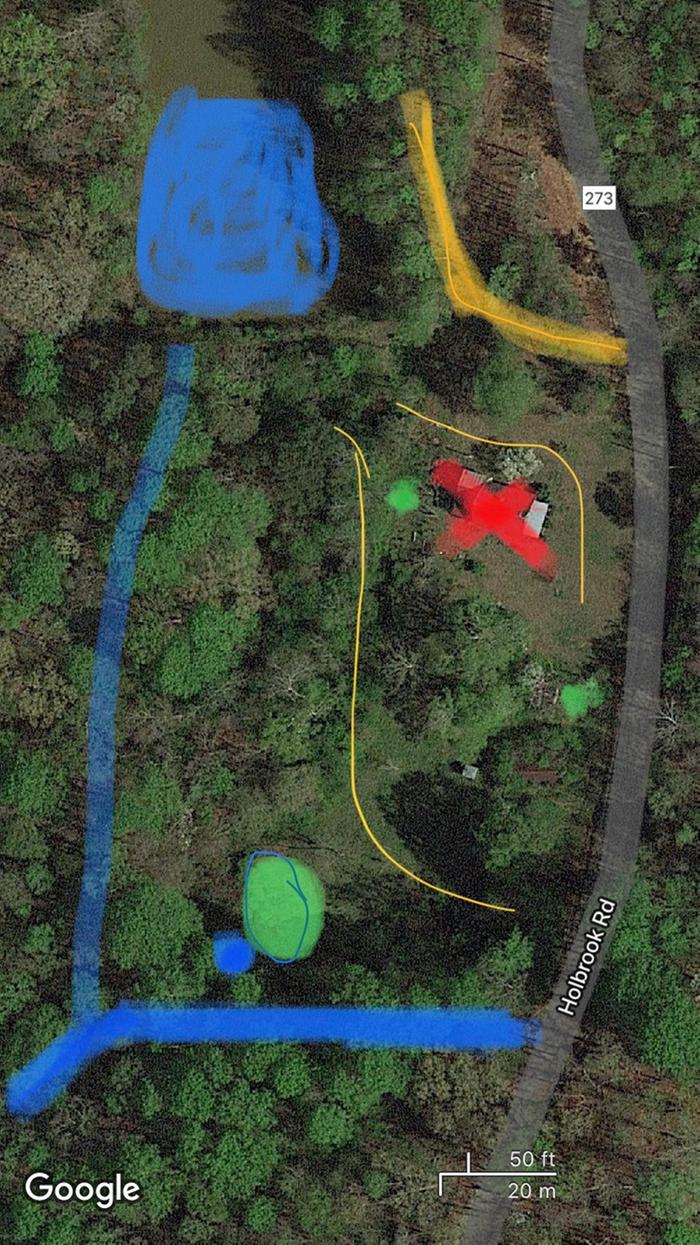 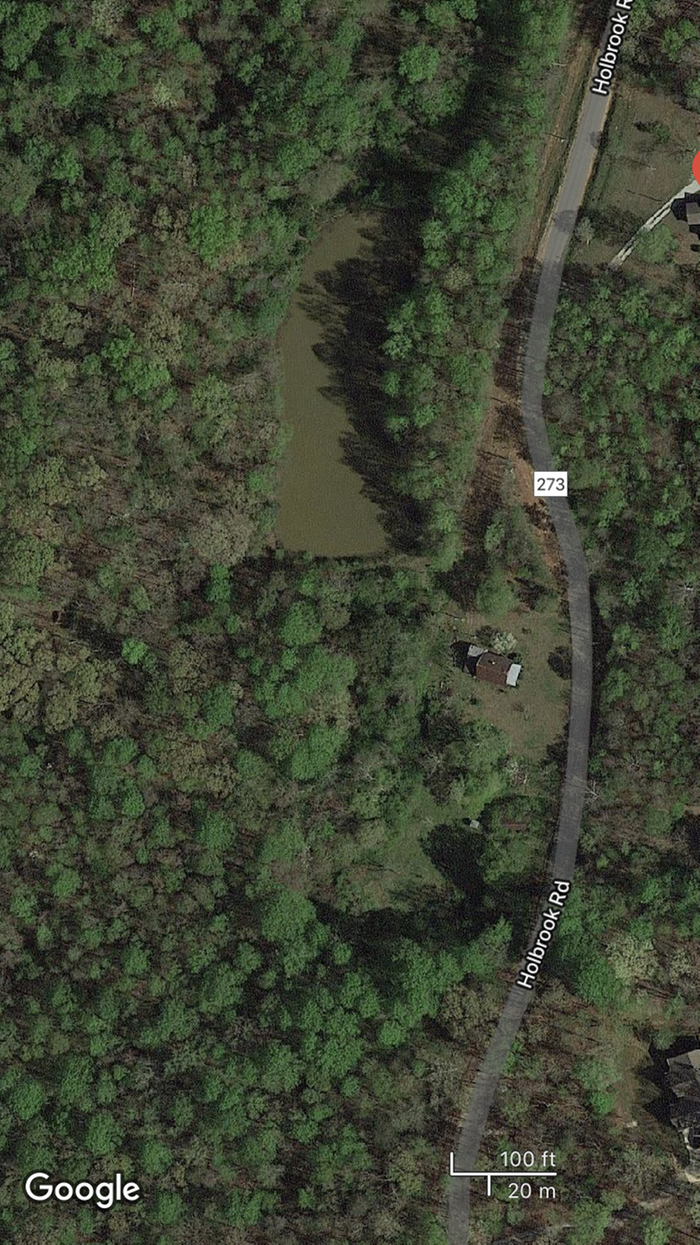 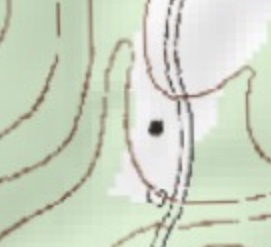 posted 3 years ago
Your writing is too skitish to understand, why not edit it a bit with headings, sentences and new oaragraphs between the topics.
But I have a few questions;
Why pull a house down?
Its often easier to renovate than get designs approved?
Why cut a swale to drain to a lake, underground flow may be doing that now

bob day
pollinator
Posts: 790
Location: Central Virginia USA
76
posted 3 years ago
I get that you're enthusiastic and have lots of stuff going through your head, it sounds like a great property, but it may already have a design of sorts in place. Certainly the pond and some of the bushes and trees point to that.

You will do well to take more time at the beginning to observe. All 4 seasons have a story to tell you, and quiet walks with no objectives in mind are a key to getting to know what it is you have, and what you might destroy by rushing in ready to put your mark on the place.

identify  your contours, (some of these will be governed by the water sources   The path tool on GE can be used to establish contours by looking at the elevation as you move the cursor and setting points periodically that are connected by the path. start at a water source and walk around the landscape with the cursor. Find any keypoints in the landscape and locate those contours

identify your sectors, ask old timers around in the area about floods and fires. Where is the predominant wind, what are your sun paths from solstice to solstice.

Where do you want to live (if not the house)  draw in your zones around that.

It's nice to have a general idea of what you might like out of a property, and also important to identify what is the best evolution of the property. It's nice if they are the same, but can be very difficult if they aren't. With 60 plus acres, likely most of that will be zones 4 and 5, so identifying the climax forest the property wants to go to and figuring out the succession path and how you might facilitate that.

good luck, and remember, if you're not having fun, you've got the design wrong.

Kyle Franks
Posts: 3
2
posted 3 years ago
Thanks for the reply. Just to clear some things up, it wouldn’t be draining the pond, rather, having a passive overflow added and omitting the drain pipe, just a slight modification.  As for the house, it’s riddled with termites. Years ago my grandmother wanted to restore it but it would end up costing too much. My grandpa farmer some of this land and I’ve spend the majority of my life here. There is abundance here in the way of hickories and oaks giving many nuts.  I agree, going back and observing with no objective in mind would be beneficial. Thanks for the reminder to start with the more simple things and taking time to do that. Again, thanks for the reply
John Pollard
pollinator
Posts: 298
Location: Ozarks
74
I like...

posted 3 years ago
If there's only one acre that's open, I don't think plant plant plant trees will be something you'd want to do right away. More like cut cut cut or bulldoze some of the existing forest.
Don't forget about the bugs in GA that you probably don't have on an island. Chiggers  ticks and fleas and about a million other 6-8 legged critters.

angelo seaver
Posts: 16
posted 1 month ago
how have things been going any updates for us?

posted 1 month ago
An old house is something that can be changed often without permits.
The fact that is is there also may allow a new one, but if you pull it down, all sorts of things may be required.