posted 1 year ago
Day 82
Happy Friday everyone! Fred and I started gearing up for the pep event that will be starting here soon,
We repaired a flat tire on Toots the van. While that was curing, we repaired a few leaks for the outdoor shower.
I drove Ranger Doug in to town to fill up the diesel cans and returned just before lunch. Until the we watered a few rhubarbs, willows and cottonwoods.
After lunch Coco and I spent the rest of the day up at the lab Cleaning up the ant plots along with anywhere else that needed to be freshened up.
20190510_082807.jpg 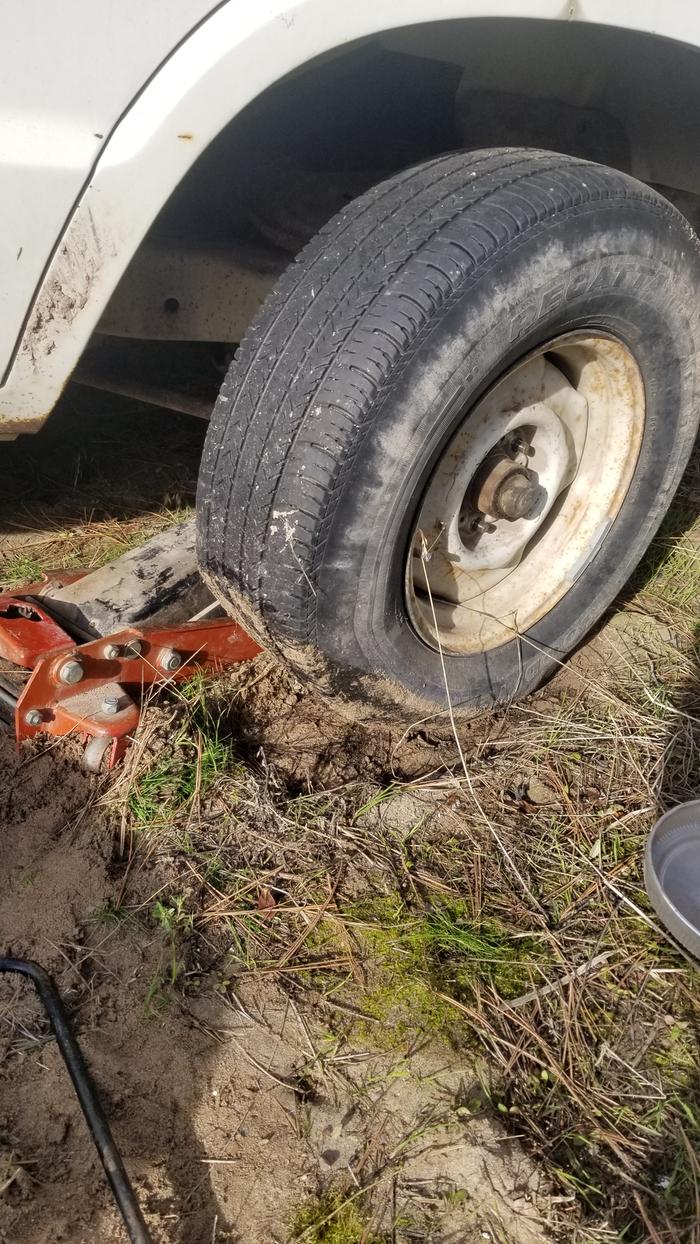 posted 1 year ago
Day 83
What a beautiful Saturday. You couldn't ask for better weather.
Spent the morning gearing up for the next phase of Elaine's soil food web course and now have a mentor to guide me through their consultant training program. I'm excited to see where this takes me in the future. Helped Jocelyn in the kitchen and made some crackers. I know she's posted the recipe on here somewhere and if I found it I would provide the link.
Drove up to the plot to tinker around. Mostly distracted myself watering things and collecting vermicompost. Seemed to manage my time well but didn't get caught in a rush, which felt pretty good. Almost as if I got just as much done taking my time rather than racing to the endless finish line.
20190511_104004.jpg
20190511_104036.jpg
20190511_104149.jpg
20190511_133712.jpg
20190511_153030.jpg
20190511_173725.jpg

posted 1 year ago
Day 84
Happy mothers day everybody! Beautiful day to plant. I planted potatoes and squash. Broadcast a sand mix of mustards and radish, herbs and flowers, lettuce and spinach.
Jocelyn gave me a few lettuce starts as well.
Helped Jeremy split a log today. Mostly helped get it off the ground and be there while he used the chainsaw.
Jumped into cat pond and it was quite refreshing.
Strung a line of fishing line around the plot for a temporary deerterrent until I repair the fence.. 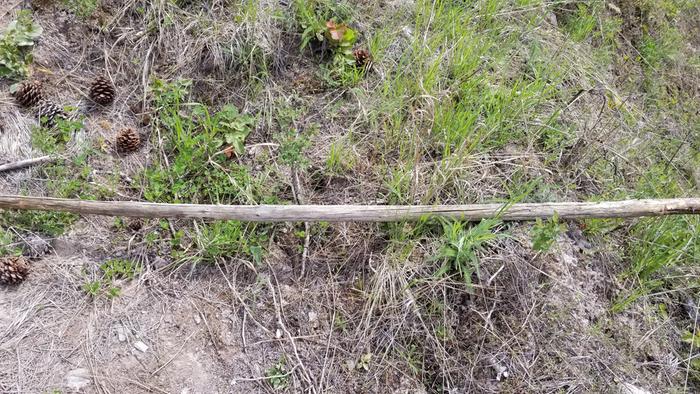 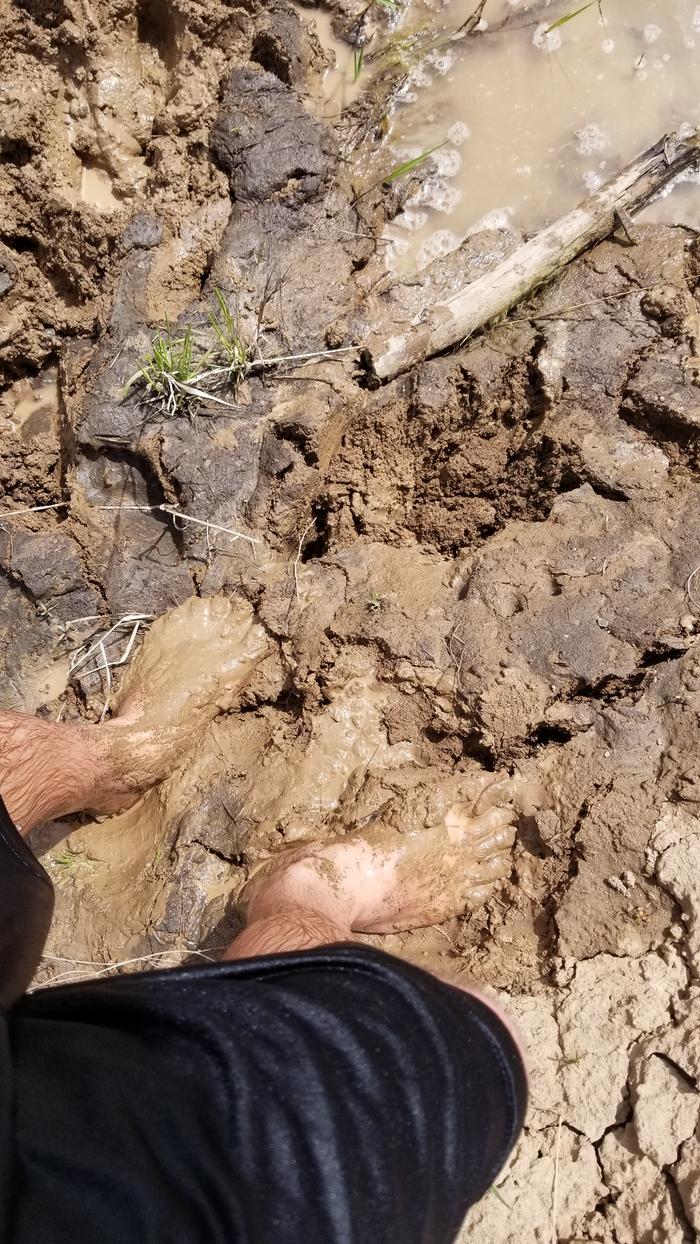 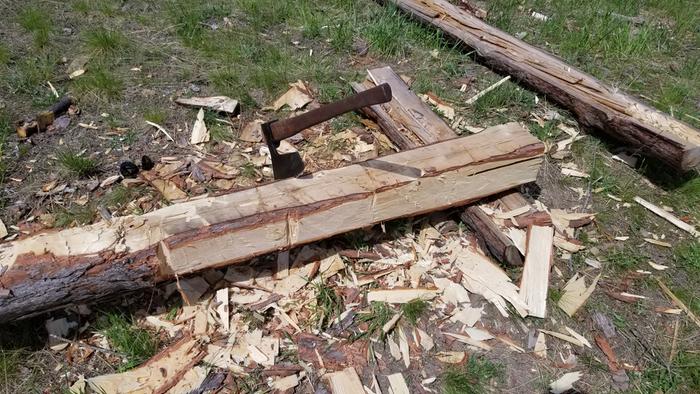 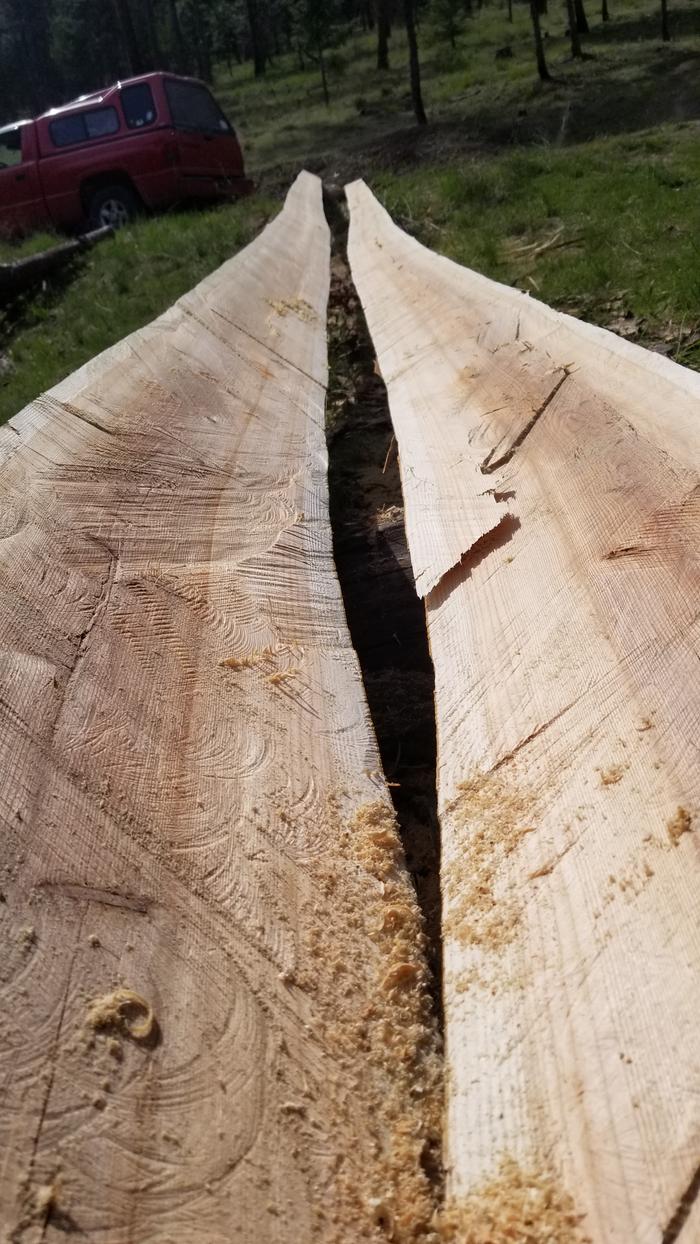 posted 1 year ago
Day 85
Started the morning off feeding the willows some rich willow candy. We mulched the trees with 3-4 cans each and had the tractor loaded with saw dust near by to cover. Washed the cans and set them to dry.
Worked on the berm shed for a bit and not far from the roof covering stage. The last thing we did was tack a 2x10 along the edge of the roof to set a height for the dirt that will fill in. I'm sure there's other reasons for it as well. I'll learn more as the project goes on.
After lunch Paul went to to the drawing board to give us an idea of how he would like the layers of tarp and dirt for the roof. Fred drove up to the lab to grab a few materials while I helped Paul and Jocelyn during their project time. They're working to break up the ground up hill from the Garage to divert water flow around instead of in. Tools mostly involve a jack hammer along with a rock bar, pick axe and a bucket to collect the rocks for future projects.
20190513_103109.jpg
20190513_103119.jpg
20190513_170454.jpg
20190513_170113.jpg

posted 1 year ago
Day 86
Spent the day on Fred's plot gathering brush for the hugel berms, planting seeds on the the berm and peeling logs with a bark spud. Fred has about a quarter of his berm ready to be planted. I imagine soon after he completes the berm phase he'll want to start building the fence and it should be deer proof. Now what to do about the chipmunks and ground squirrels?
This morning I checked on my plot and something ate the rest of the lettuce that Jocelyn gave me and rested a potato that they nibbled on next to it.
After lunch Fred jumped on Rex and I got to planting sunflowers and squash on the berm. Well I started peeling a log but it was already rotten so I figured I'd plant to a certain point and look for another log to peel. By the time I got back to peeling it was time to head down for taco Tuesday.
20190514_075158.jpg
20190514_085304.jpg
20190514_105318.jpg
20190514_121134.jpg
20190514_133614.jpg
20190514_133633.jpg 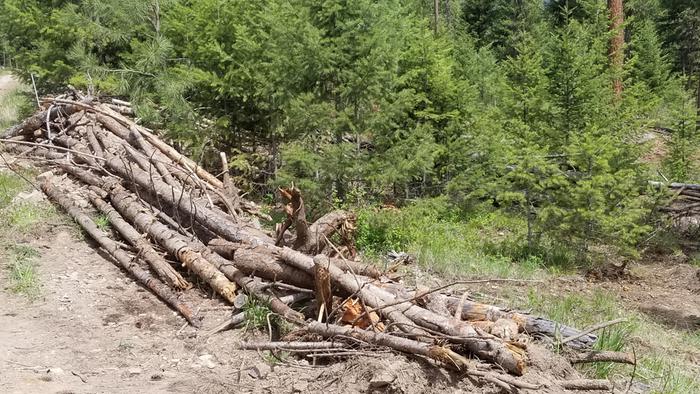 posted 1 year ago
Day 87
Worked on the berm shed today. We got the tarps on and started throwing sand on it. We layered the existing tarps from the wall on to the roof then layered and stapled old billboard tarps over that to cover the roof. Rolled out black plastic sheeting for the next layer and poured buckets of sand in the loose parts working from the middle out to make a more even surface and prevent tearing. laid the final black plastic over that and covered the roof with sand to protect from solar damage for now. For the rest of the day we did what we could covering with sand, making trips with the tractor, shoveling and filling buckets. Solid progress, looking forward to the bootcamp filling up and cruising through these projects.
Yesterdy I posted a picture of ants on a fir tree and thought they were protecting it. Turns out they were more likely farming aphids, milking the aphids with their antennae to consume the honeydew from the termination of the aphid's alimentary glands.
20190515_091038.jpg 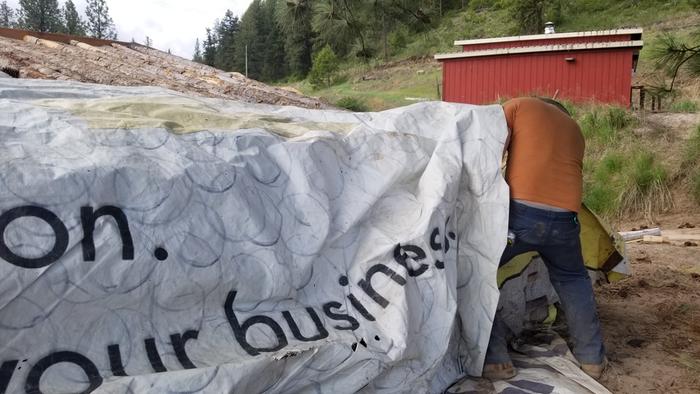 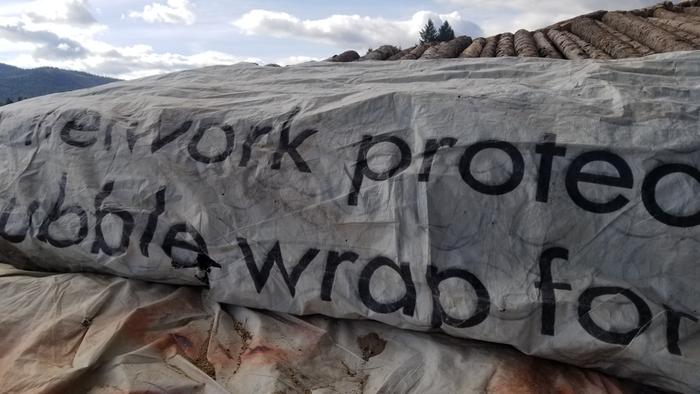 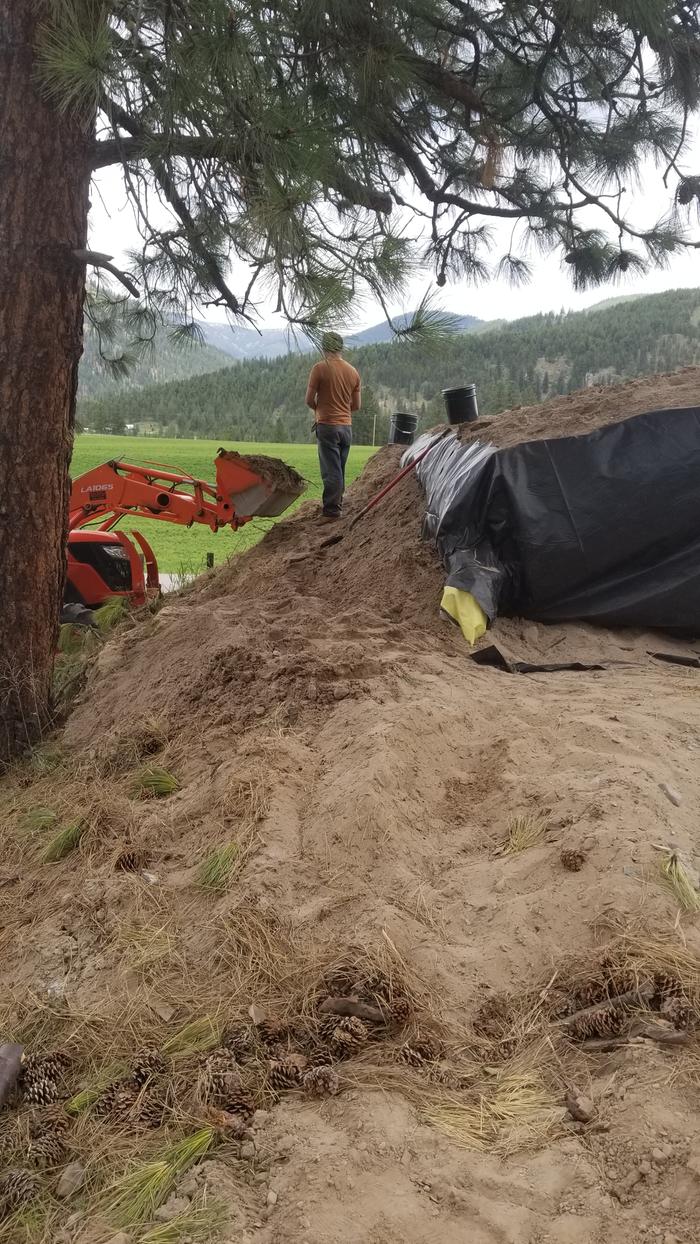 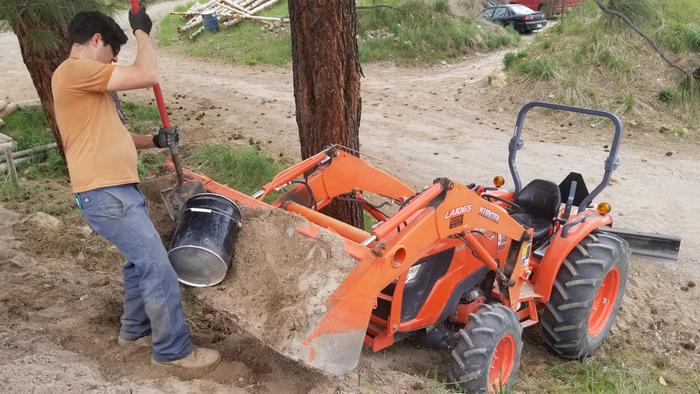 posted 1 year ago
Day 88
Worked on Fred's plot for the first half of the day. He soaked Lentils the other night to plant on the berm fence before the predictd rain forecast for the next few days. There were also special mixes for the inside and outside of the berm. The outside being more deer resistant. Learned about columbine, dock, tanzie, collendula (marigold), henbane and musclewood. The way I could tell the differences between the mixes were the marigolds for inside and maple wings for the outside. After lunch I planted the rest of the lentils while Fred planted other things then we drove down to basecamp to work on the berm shed.
Covered most of the plastic with sand using the tractor to fill up and throw on using 5 gal buckets and shovels. One side was convinient enough to pile up with the tractor and spread from there. We'll see what the rain uncovers for us in the next few days. 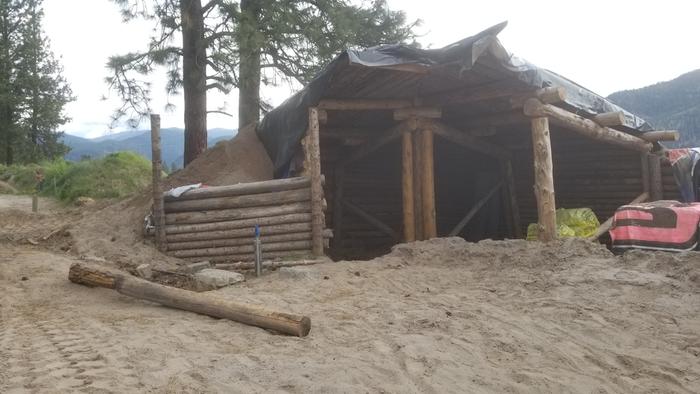 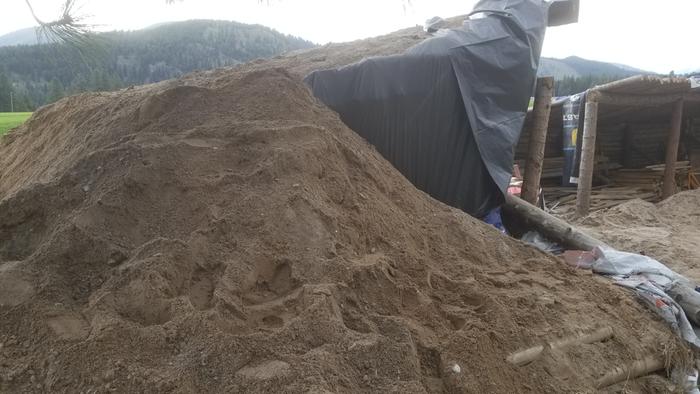 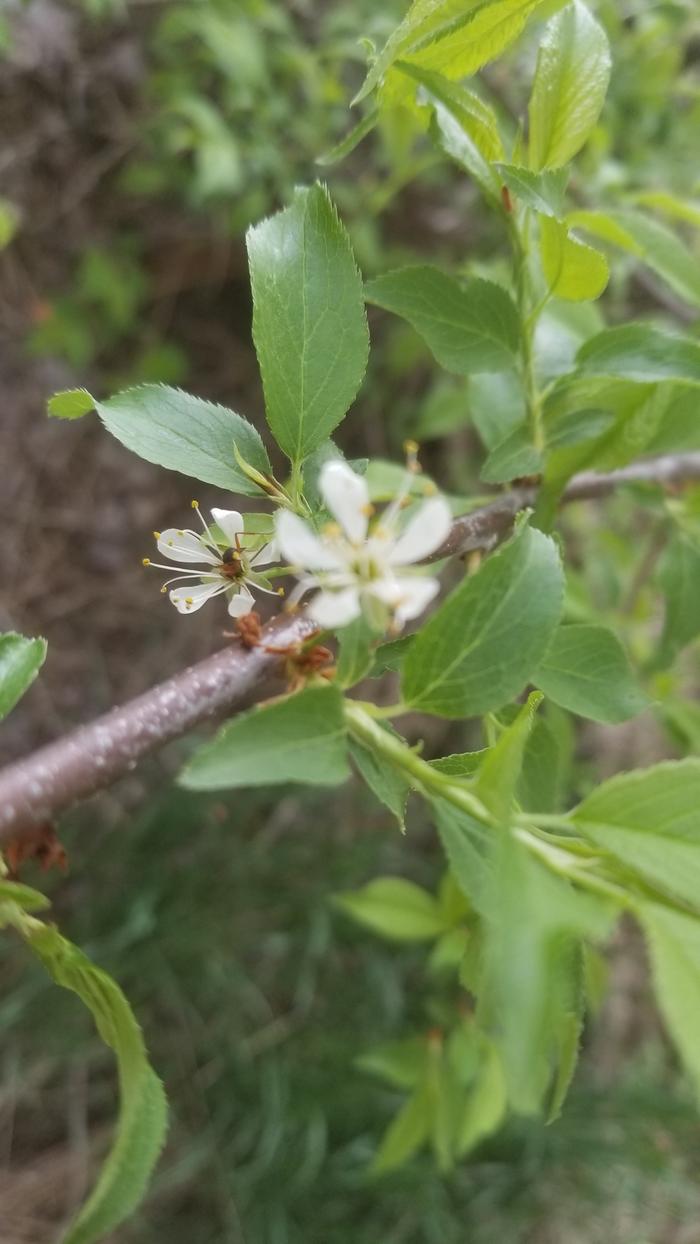 Only two more days until you get (if I'm understanding eerything right) $700 and a dragon and a fairy, as well as a hat from Inge! Have you thought about what color dragon you want and what you want your fairy/elf/figure to look like?

Only two more days until you get (if I'm understanding eerything right) $700 and a dragon and a fairy, as well as a hat from Inge! Have you thought about what color dragon you want and what you want your fairy/elf/figure to look like?


Yes, I was counting days too. Robbie, what size head do you have? I hope it's not as big as Paul's head. I can knit through summer and then send the knitted hat/cap and you can wear it when the weather gets colder again. If it arrives ...